Peter William Grant was born in Doncaster, Yorkshire, on 10th May 1916. His father was a travelling clothier or draper from Inchture, near Dundee in Forfarshire called William George Grant (1878–1951) and his mother was Harriet Jones from Doncaster (1877-1945).

His father’s Army records from the First World War, give his address as 30 Beechfield Road, Doncaster, a street lined on either side with terraced houses, opening out onto countryside at the far end. They had moved to 155 Beckett Road,Wheatley, Doncaster by the time he attended College in London. Beckett Street (as it is now called) appears to be a pleasant, leafy suburb, consisting of red-brick terraced houses with small private gardens.

It is likely that he may have known Olive Zorian, who like him, was born in Doncaster in 1916. Although once a very well known violin soloist, her ‘fame’ has been somewhat overshadowed by that of her more famous husband, John Amis, and unfortunately almost all internet searches that mention Olive are as an aside, in a piece actually about him. There are a few references to her in The History of the Royal Manchester College of Music, 1893-1972, By Michael Kennedy, and I believe Polam Hall (boarding school) in Darlington, where she attended school, published her obituary in 1965 – or the following year – in their O.S. Journal. After attending the Royal College of Music, Manchester, Olive Zorian went on to study at the Royal Academy of Music in London. Olive was certainly a good friend of Rosemary Clegg’s (who also went to Polam).

It would appear that he and his first love, “Yolanda” (Rosemary Yolanda Clegg) – very likely introduced by mutual friend Olive Zorian – may have eloped to Scotland, where, at 23 Melville Street, in Edinburgh’s Haymarket District they could marry without parental consent, on 18th September 1937. The witnesses whose names appear on the marriage register are one William Sneddon and one Georgina Neal Watt or MacDonald of 7a Northumberland Street, Edinburgh. Interestingly, Peter gives this same address as his own current one (though giving his usual address as 11 Stanley Mansions, Park Walk, Chelsea; a block away from that of his young wife; a Ballet Dancer, living at 86 Beaufort Street, Chelsea. It seems likely that Peter knew the witnesses; in order for him to have been staying with them. Perhaps they were relations: his grandfather, Peter Grant, came from Edinburgh, and he may well have had cousins, aunts or uncles, living there at that time.

She knew him whilst either still at school, or very shortly afterwards and had a childish infatuation for him; drawn to his sweet disposition, above average intellect and enormous musical talent no doubt. She wrote in the back of one of her school exercise books, under the heading “Confessions” – a list of things she liked: Favourite Names: Peter, Michael, Rosemary, Virginia, Ann, Favourite Authors: Peter Grant, Favourite Composers: Beethoven, Bach, Sibelius, Delius, Mozart, Boradin, Stravinsky, Glazunov, Moussorgsky, Rimsky-Korsakow, Rachmaninoff, Tchaikowski, Manuel de Falla, Ravell, etc etc!!! Favourite Piece of Music: Pantomime, (El Amor Brujo, de Falla), Favourite Book: Winnie the Pooh, Favourite dance: Rumba, Favourite Rhythms: Bolero, Tango, Favourite Film Stars …and here a long list follows! (She also wrote a list of things she didn’t like, but that is for another time!)

During their courtship he would have taken his young lady out to the cinema, to see the latest movies, to dinner – perhaps to her favourite restaurant: “España” on Waldour Street; “In the heart of London’s Theatreland”, to the theatre to see a play, or to the ballet – perhaps he even saw her dance – and to listen to music.
What inspiration, what energy and drive, what feeling of invincibility must he have felt in the first throes of love? So inspired was he by his sweet, adoring, beautiful, clever, talented, musical girl, that he wrote and devoted a piece of music especially for her …….“Yolanda, this is the sketch, it’s far more like one than a finished work on clean manuscript paper. The little tune is almost like a folk tune. It’s very crude at the moment but in the completed work it should be better. As you know it is for orchestra. The tune calls for the oboe and the rest of it for low sustained strings. It will commemorate a memorable evening with Mozart and other things. Peter”

He went on to further study at the Royal Academy of Music; although it may not have been as a full-time student. The Royal Academy has as yet been unable to find records pertaining to him, but they have stressed this does not mean he didn’t attend there. We do know however, that he was training to be a Concert Pianist, so the RAM seems the most likely of the ‘Conservatoires’. 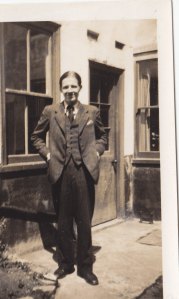 After they were married, the couple moved to 39, Lower Richmond Road in Putney. From their front doorstep they could see the Thames, with busy boats passing by, and on the bank sits the Duke’s Head public house, directly opposite them. There was a back garden where they planted flowers and played with their Staffordshire bull terrier and a tiny black kitten. 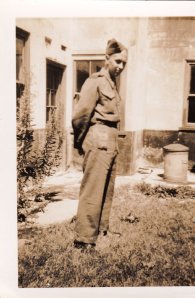 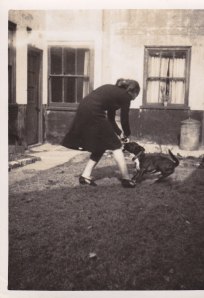 He can be found in 1938, on the Electoral Register, at this address, and in 1939 he is listed in the London Telephone directory: Putney 5332.

On 27th June 1940, he was called up; drafted into the Territorial Army for the “duration of the Emergency” under the provisions of the National Service (Armed Forces) Act 1939. His unit was posted to the King’s Royal Rifle Corps.

On 5th June 1941, Peter and his wife had their first baby; Rosemary, born at the Brooklyn Nursing Home, 321 Upper Richmond Road, Putney, under the care of one Margaret E. Read. Peter registered his daughter’s birth, and gives his profession as ‘Author’, (as well as ‘Rifleman’ with the KRR, Serial number 6580801).

On 27th September that same year, he was sent with his battalion (2nd) to the North African/Middle Eastern campaign (M.E.F.)

He was declared “Permanently unfit for any kind of Military Service” and Discharged on 24th January 1943.

Further records of Peter disappear for a time here, until he is mentioned in his mother’s Probate records, granted in September 1945, and he and his father inherit, jointly, her estate of £2099 2s 2d. Her address is given as The Nook, 6 St. Mary’s Road, Dunsville, near Doncaster, and her husband is named as “Draper” and her son “Author”. She died at Doncaster’s Royal Infirmary, on 20th April, 1945.

Evidence that his wife was still living at the marital home can be found from her personal letters, from where she was writing off for copies of photographs (for her portfolio), obtaining references from friends, attending auditions and seemingly doing all she could to find work (on the stage).

And we have no reason to think that Peter was not also living at this address at this time.

However, a troubled “Mollie” (her nickname that all her friends called her by) sought help from her friend, Olive:

His wife’s adopted father, Joe Henry Clegg – with whom she enjoyed a loving father/daughter relationship (as can be evidenced by the warmth by which he addresses her in his letters) – gives her address as 39 Lower Richmond Road, Putney, W15 on 17th November 1944, when he signs his Will. (Although we cannot by any means take this as proof of her residency at that date, it seems a natural assumption to make that a man might know where his beloved daughter lives!)

In 1948 Peter married again on 21st December, in Marylebone, one Evelyn Honor Lucille Gilliat-Smith. The  registry entry gives his address as Barn Cottage, West Hoathly, West sussex (where we may suppose he and his father probably moved to sometime after his mother’s death in 1945). Evelyn had been a Special Operations Executive (Intelligence) during the war. She was born overseas, on 12th December 1912. Her address at the time of the marriage is given as 17 Highbourne House, Marylebone High Street, W1.

Records of Peter can again be found in the Telephone Directory from 1949 through to 1968, where he can be seen living at Barn Cottage, West Hoathly, West Sussex. (Telephone Sharpthorne 43)

Peter attended the internationally renowned Stoke Mandeville Hospital; pioneers in spinal cord injuries; for many years as an outpatient. Although he was in permanent, often agonising pain, he did manage to get around, albeit in an ungainly, twisted fashion, with the aid of a stick. His crippling disability prevented him from sleeping on a bed (he slept sitting in an armchair in his study, surrounded by his vast collection of books, or from playing the piano, as he could no longer sit at the instrument either comfortably or in the correct and required position.

Though he could no longer play himself, Peter devoted much of his time to the preservation and recording of ‘authentic’ “Folk” (Traditional) music, with such esteemed people as Mervyn Plunkett and Reg Hall, capturing for posterity such great players as Scan Tester. Some recordings were made at the local public house, The Cat Inn whilst others at Peter’s own home, Barn Cottage.

He collaborated, again along with Reg Hall and Mervyn Plunkett; on a publication called “Ethnic” (copies of this are held by the Oxford Reference Library). Their website offers the following brief description of this magazine: “A short-lived home-made periodical, subtitled ‘A Quarterly Survey of English Folk Music, Dance and Drama’ compiled and published by Mervyn Plunkett, Reg Hall and Peter Grant. The first issue was dated January 1959 and the fourth and last came in autumn the same year. In an aggressive style, Ethnic championed the collection and study of authentic traditional style and repertoire in contradistinction to what its editors saw as a burgeoning revival movement based on false principles, little knowledge and cosy middle-class fashion. The magazine included several important articles based on first-hand experience (such as one on May Day at Padstow in issue number three, and several on particular singers and musicians) and its criticisms are also useful for evidence of a critical time in the post-war development of folklore studies and the folk-song and dance revival”

Peter pursued a career in writing, or journalism. There are six surviving pieces written by him, mainly film reviews, spanning the period between November 1947 and March 1951 which appeared in the National Federation of Women’s Institute’s quarterly publication “Home & Country” (Home Counties Edition).

These articles are tremendously important to a biographer, as they give a real voice; an insight into the person behind them that we would not otherwise have had from the previously scant records and handful of photographs which remain.

Peter died of a heart attack on 23rd April, 1980 at Cuckfield Hospital in Sussex.

There is a thriving local community in Hoathly as can be seen from this extract taken from a correspondence a few years ago: “I am the Archivist for the local History Archive and also a Jazz collector. The latter is important because when Peter’s second wife Evelyn moved out of Barn Cottage into a residential home, she gave me a stack of reel-to-reel recordings of jazz records which Peter had made in the 1950s. One of these contains Peter and others discussing jazz with some of the other local folk and jazz enthusiasts. I do also have some information about folk recordings made locally.”

It is a tragedy that Peter was denied, through circumstances about which we know nothing, the opportunity to have a relationship; or indeed any contact at all; with his daughter, Rosemary.

It would seem – no doubt in an ill-conceived notion that it was “best for the child”; that he may have been asked; and duly agreed; to keep out of her life. It would not be difficult to persuade a man in his position that a fitter, stronger, younger, more able-bodied man could better provide for the child.

But it remains a great pity that his identity was kept from her and that by extension he never met, nor we may suppose knew of, the existence of his two grandchildren Louise and Scott.

Rest in Peace Peter Grant. You are not forgotten.