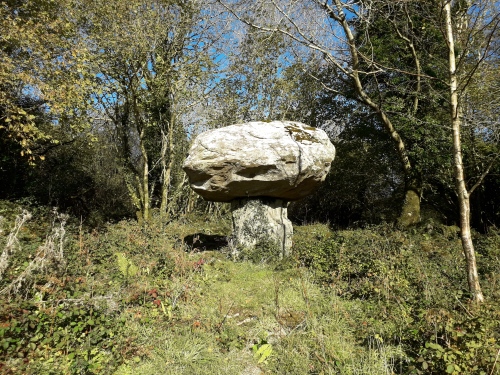 Sometime during the summer/autumn of 1992, Dessie and I went for a cycle ride along the road from Kenmare to Kilgarvan (R569). We stopped just beyond the crossroads at a farmyard. The farm house at the roadside was obviously abandoned, the farmer having built a new house in the middle of the field alongside. I remember thinking what a pity it was to see this pretty little house empty and how nice it would be to live in such a house (I lived in a tiny bedsit above the Green Note Music Shop).
We cycled /pushed our bikes through the farmyard’s various gates and followed the lane through an avenue of beech trees.
At the end of the lane-way, one can see evidence of the old train line to Kenmare; a perfectly straight boreen between two ‘ditches’ (rough-built stone walls)stretches off to the east and to the west, and old iron gates remain here and there.
Our path led us to the most amazing spectacle. A vast boulder of sandstone rock sat perched on a pillar of limestone rock.
Dessie explained how after the ice age, this boulder had rumbled its way down the hillside with the melting ice and came to rest here. Scientists tell us that the boulder would have been sitting on a level ground of limestone which has, during the last 18,000 years, eroded away. Except for the pillar which has been given protection by the gigantic sandstone boulder. It is (apparently) still eroding!
Recently, Bobby and I visited the mushroom stone. Curiously, Bobby, a man born and bred in Kenmare had never even heard of it! We walked the lane on a bright, crisp day at the end of October and the sun shone, lighting up the stone at the end of the lane. Bobby was amazed at it (as I had been over a quarter of a century earlier).
The following week our dear friends “the Pendys” came over for dinner. Imagine my surprise when young Flor came in with a book in his hand (“Reading The Irish Landscape” by Frank Mitchell & Michael Ryan”), saying to Bobby “I suppose you knew about this for years Bobby…?”
How extraordinary that these two men, who came from “The Pound Lane” and grew up together, a few doors apart, lived their entire lives in total ignorance of this fascinating geological site on their doorstep! And what a coincidence that they both discovered it within a fortnight of each other, quite independently!
“There are more things in heaven and earth, Horatio, than are dreamt of in your philosophy”