A Musical Revolution – by Peter Grant

The power of music to stimulate emotion, to excite, and to relate together people, emotions and memories, has been used in cinema since the first battered piano, tinkling in a stuffy hall, put some life into the first jerky love-scene, or imitated galloping horses with hurry music. But even after the talkies came, commercial film producers went on using the same old mood music of the silent days – a wash of emotional tunes from operas, light music and familiar classics, sometimes supporting the film, more often flooding uselessly among the dialogue. For audiences, such music became a bad habit, without which they might have felt lonely. They hardly realized that because it was not original it often bore associations at odds with the film. We have seen murder accompanied by Wagner’s Good Friday music from Parsifal. But nothing so comically unsuitable could happen now; for within the last dozen years a new kind of music has appeared, composed expressly for films as a servant of the story.
The new film composers discovered (the greatest non-commercial directors had known the facts ten years earlier) that film music must suit the film – that Beethoven at the wrong moment is bad, a shoddy tune at the right moment good. Also they found that the picture always comes first, and then the dialogue, which music should never muffle: the old-time music arrangers were only happy when their musical sauce smothered every foot of film! And lastly they found that because music is one unreal element within a mainly realistic art, to use it clumsily is intolerable. There is a good example of the clumsy use of music in Scott of the Antarctic. Here its sudden intrusion, to underline the disappointment of Scott and his friends on seeing Amundsen’s victorious flag, is so theatrical that we, instead of being stunned by the drama, become aware of the orchestra, of men with violins and ‘cellos; and the sense of reality- the hall-mark of everyday cinema- goes.
The emotional power of music, properly used, can heighten an already emotional scene and give wings to feelings which if spoken might be comic or boring. It can also create a contrasting mood to a scene. Thus in Western Approaches, Clifton Parker’s sombre opening music is truer of the general mood of the film than the unjustified cheerfulness of the characters. But too often directors, even to-day, instead of creating atmosphere with music straight off, distract us with some pointless fanfare or march.
The power of music to relate emotions and people is crudely turned to account in the “theme song” and the “signature tune”, an early example of the last being the sprightly “cuckoo” march which always announces the arrival of Laurel and Hardy. Far less simple is the use of distinctive musical figures – wisps of tunes or progressions of chords – which being brief, seldom get out of hand. Such figures, if we really listen to them, often reveal aspects of character we might otherwise miss. An example of a “theme song” which really tells us something is to be found in the French film Un Carnet de Bal (The Dance Programme), in which a romantic waltz is related to a woman’s longing to recapture her youth; and gradually, with her disillusion, the waltz changes, becoming in the most frightful scene, frightful itself. When music and drama are related like this the film gains strength and becomes a unity; but themes are often wasted, a recent misuse being Bax’s Oliver theme from Oliver Twist, which neither increases dramatic tension nor underlines Oliver’s emotions.
Rhythm, the physically exciting aspect of music, is used nowadays with far more discretion and care than formerly. Rhythmic music can imitate the rhythm of the actual photographic shots; indeed, sometimes the music is composed first and the separate shots edited to match it. In cartoons this is fairly common, but it does sometimes happen in ordinary feature films, usually as a cynical comment: we all know how a pompous fool can be made to look silly if some cheeky bassoon imitates the rhythm of his walk. More often, however, we find the music taking over the rhythms of natural sounds – a train or dynamo. Clifton Parker in Western Approaches suggests in this way the mystery of New York harbour at dawn: the orchestral instruments and the hooters and sirens of the ships mingle so closely that you can hardly tell one from the other.
The new film music is more successful than the old business it is usually appropriate, discreet and brief. More has been done with it that I have been able to mention, and much more can be done. However, it is remarkable that within a dozen or so years, from being a prominent member of the cinema awkward squad it has become a reasonably smart recruit
PETER GRANT

Ealing studios’ third comedy of recent weeks, Whisky Galore, is about a wartime whisky drought in a Hebridean island, and the struggle between authority and the islanders when a ship carrying 50,000 cases of the stuff is conveniently wrecked off the shore. And on the Sabbath too – which gives the authorities an unfair start; for the islanders, to a man, respect the Sabbath. The photography is sometimes lovely, the acting fair, the humour boisterous. The main joke, however, is too long, the cutting (the progression from shot to shot) often weak, and the lighting often bad, and the music rowdy. But the film is entertaining and fresh. Now Barabbas is about men in prison. Some of the characters are, perhaps, types, and the flashbacks showing us how they came to be in jail, unavoidably clumsy. But the camera really does create a closed-in atmosphere. Richard Burton, as a political prisoner, and the negro*, Glyn Larson, are both excellent. The best thing about Whisky Galore is that it takes us outside the studio, and about Barabbas, that though it takes place inside a studio, its background, the prison, is convincing. Moreover, it isn’t a depressing film; so if it comes your way, try it.
P.G. 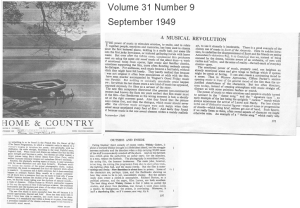 This article was first published in September 1949 for the Federation of the Women’s Institute magazine “Home & Country”, Home Counties Edition, Volume 31, Number 9, and priced threepence.
Peter’s piece appears on page 193 & 197

*I am aware that the word “negro” is considered offensive to some, for which I apologise. It appears here in an historical context – pre 1966 – It is present in the original text, which I have typed out faithfully, from 1949.